November 15, 2019
Usually, customers are familiar with VMware virtual switch such as vSphere Standard Switch (VSS) or vSphere Distributed Switch (VDS). With NSX Datacenter, we introduced a new version of virtual switch, named N-VDS. The reason why VMware took this decision is to decouple NSX from vCenter. For those who are already running NSX for vSphere (NSX-V), you should know that there is a 1:1 relationship between NSX-V Manager and vCenter where NSX-V leverages VDS to offer networking and security features. This is not the case anymore with NSX-T.

Here this is a quick recap on definitions and differences.

The following picture shows differences between VSS, VDS and N-VDS.

In which case do you need to migrate from VSS/VDS to N-VDS? The answer is pretty simple: When the host has a maximum of two (2) physical network interface cards (PNICs). Because you have limited hardware resources and high-availability is a requirement, you cannot unfortunately leverage your existing VSS/VDS and must migrate to N-VDS.

Like a traditional switch, the N-VDS must own one or multiple PNICs, and these latter cannot be shared with another virtual switch.

There are some rules regarding Transport Zone, N-VDS and Transport Nodes (from the NSX-T Reference Design Guide - https://communities.vmware.com/docs/DOC-37591):

NSX-T introduces the concept of logical uplinks for N-VDS in order to provide features like LAGs and define teaming policies. The definition of N-VDS logical uplinks is done via uplink profiles.

One logical N-VDS uplink can be mapped to a dedicated PNIC or be mapped to two (2) or multiple PNICs in LAG mode.

In addition of uplink definition and teaming policies, Uplink Profiles specify other parameters like: 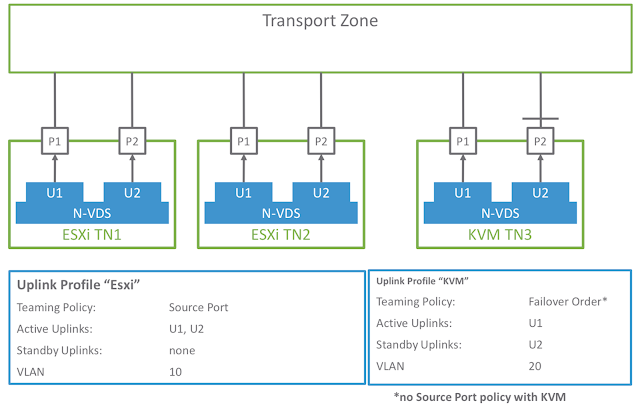 A NSX-T Segment is a layer 2 broadcast domain. If we compare with VSS/VDS, a segment represents a Port Group (or DvPG) where the VMs are attached to. Depending the N-VDS type, a segment can be a VLAN backed segment or a Overlay backed segment.

We are now familiar with all N-VDS terminologies, let's see how to migrate from VSS/VDS to N-VDS.

As described above, an uplink profile is required. This profile "Compute-2pNIC-Failover-Profile" defined
Note: [DEFAULT teaming] is for the Overlay traffic. "NAMED" teaming policies is for VLAN backed segments. 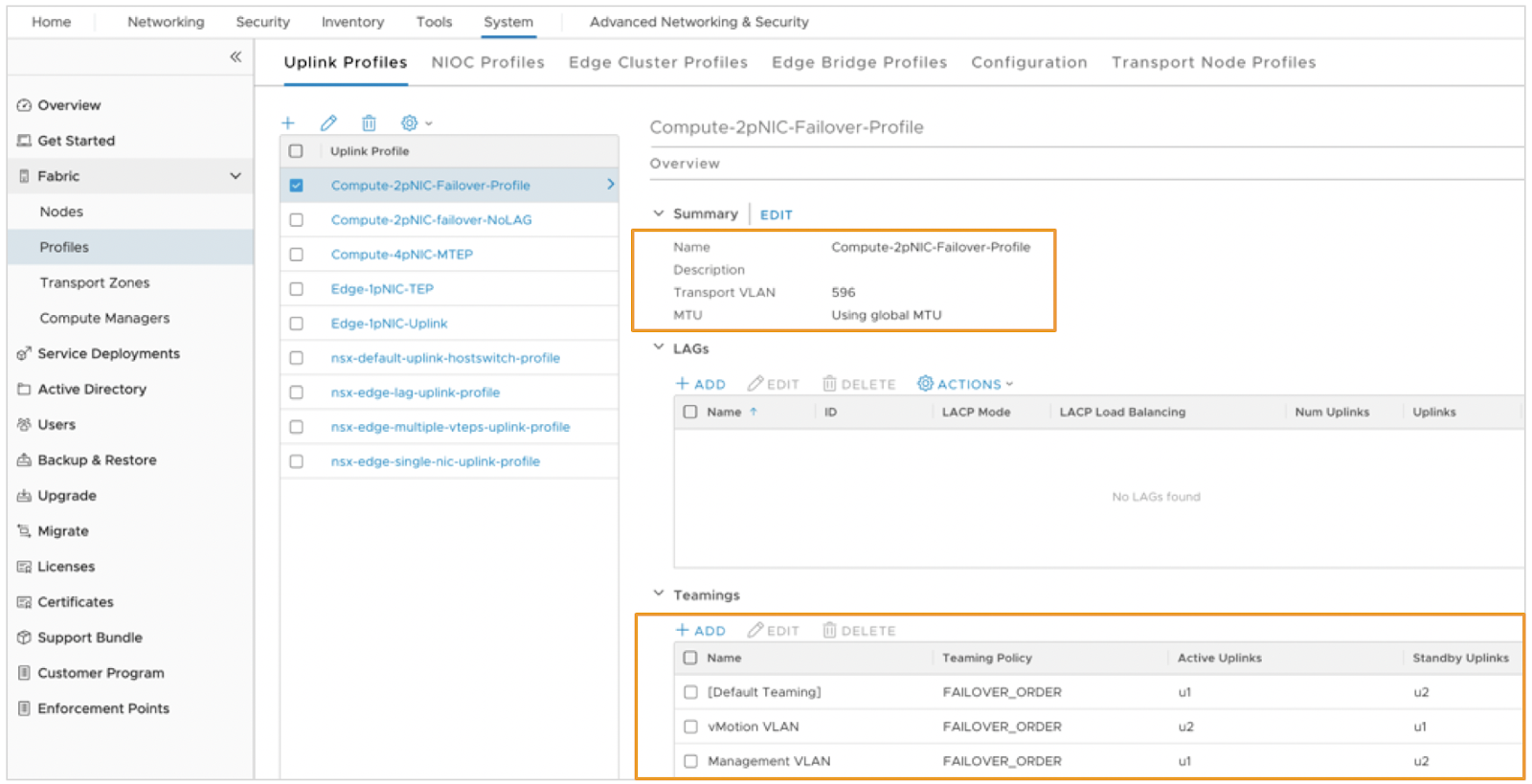 For the migration, we need to "map" existing Port Group or DvPG to NSX-T segments. In the following picture, you can see that two (2) VLAN backed segments have been created with the following information:
Note: both segments are part of  "Compute-VLAN-TZ" Transport Zone.

Let's configure the transport node ESXi. First Select the host (or can be by cluster) and Click on "Configure NSX"

Then Select:
- Transport Zones: "Compute-Overlay-TZ" and "Compute-VLAN-TZ"
- N-VDS: "HOST-NVDS"
- Uplink Profile: "Compute-2pNIC-Failover-Profile"
- NIOC Profile: default
- LLDP Profile: Enabled or Disabled
- IP Pool: I assume that you have already created one. In my case, I created "VTEP-IP-Pool".
- Physical NICs: Select existing PNICs and map them to NSX-T logical uplinks defined in the "Compute-2pNIC-Failover-Profile" Uplink Profile
- Network Mapping for Install: click on mapping. This is where we map existing VMkernel Adapter to Segments. Here vmk0 is for management and vmk1 is for vmotion. These VMkernel Adapters will be migrate from Port Groups to NSX-T segments.

When you save and apply the NSX configuration to the transport node ESXi, you should see the following results:
- Configuration State = Success
- Node Status = Up
- Transport Zones applied
- N-VDS applied

Now let's see the result on the host itself.

As you can see the existing vmnic0 from VSS vSwitch0 is now migrated to the N-VDS "Host-NVDS" and VMKernel Adapters are now attached to NSX-T Segments.

Same results applied to the VDS "VDS-NSXT-Collapsed".
Now both vmnic0 and vmnic1 are associated to the N-VDS "HOST-NVDS" and VMKernel Adapters are now attached to NSX-T Segments.

I hope you enjoyed the article.
Next time, we will go through EdgeVM Design for NSX-T 2.4 and NSX-T 2.5
At the meantime, feel free to ask questions or put comments.